Almost two weeks ago, I filed into an office tower that sits above Powell Station in San Francisco for something that I thought I'd never experience again: the first day of school.

I always liked going out into the world and getting work done much more than talking about things in a classroom. Case in point: my senior year, I dropped the "Campaigns & Elections" course at my university so I could spend more time working on the 2008 Obama campaign in New Hampshire. So when I graduated in the spring of 2009, I didn't think I'd ever return to the classroom.

But as the years passed, I moved farther away from doing work that I loved, and work that made the kind of impact that I wanted to make. Somehow, working with foundations and non-profits had morphed into brand marketing, and worse, I'd never made an affirmative choice to pursue that rather than the political work I once loved.

So this September found me taking stock of what I want to do with my life. I had just spent a week with an incredible community of people, people whose natural instinct is to build and create. And I realized that I wouldn't be happy with my impact unless I put myself in a better position to build and create.

My first love was always computing. Here's me before my first birthday, playing games on an Apple II: 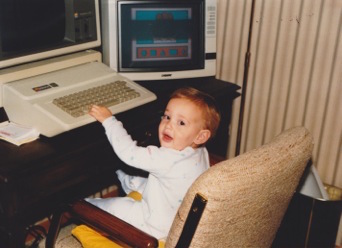 I was building computers before I turned 10, and before I learned how to make friendships in the real world, I made them on Internet Relay Chat. I was lucky enough that my high school had a Computer Science department (OK, one CS teacher) - and I was one of the best students there, winning the Computer Science Award my senior year. But I gave it up when I left for college, focusing all my energy on making an impact through politics.

Now, I'm returning to that first love. In ten more weeks, I'll graduate from Hack Reactor, regarded as the most rigorous and prestigious of a new breed of educational institution. Thus far, it's been a challenge - I'll go into the first two weeks in some upcoming posts. But it's an exciting challenge, the kind that gets me out of bed in the morning.

And most importantly, I'm learning how to build and create. I can't wait to see what I make.